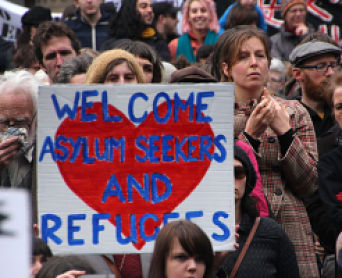 This year of grace, 2014, has begun with some startlingly ungracious omens. Two are especially distressing: the appalling treatment of asylum seekers who have knocked on our door in search of refuge and protection; and the way the Abbott government has damaged relations with Indonesia.The veil of secrecy enveloping the treatment of asylum seekers in indefinite detention camps on Christmas Island, and even more disturbingly on Nauru and Manus Island, is deeply troubling, as Fr Edmond Nixon points out in his parish bulletin in North Perth. Read Bruce’s editorial in full.
Photo Welcome asylum seekers & refugees – Refugee Action protest 27 July 2013 Melbourne, by Takver, flickr cc. 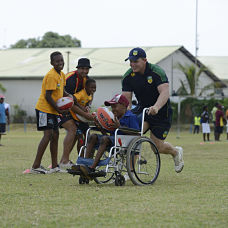 The Abbott government is contending that there has been a sharp increase in numbers of people on disability payments, such that the system is becoming unsustainable. is there massive rorting of social security, or are there other explanations. At first glance, the numbers of people on disability payments appear disturbing, increasing from 236,800 in June 1980 to nearly 800,000 in 2013. The disability payments are more generous than the miserly Newstart, paying $260 a fortnight extra. At the beginning of 2014, the disability payment for a single independent person over 21 is $751.70, and for those under 21 is $532.60. Read this article in full.
Photo PMs XIII Coaching Clinic and Match, by Department of Foreign Affairs & Trade, flickr cc. 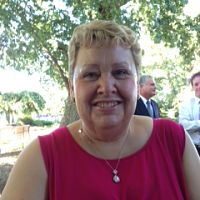 The Board of Social Policy Connections is delighted to welcome as a member Major Jenny Begent from the Salvation Army. Jenny was one of the speakers at the November conference of the Yarra Institute on Key challenges and responsibilities of the churches in the current social context. Jenny has been a Salvation Army officer for 28 years, serving in leadership positions in Western Australia, Tasmania, and Victoria. Her main areas of expertise are in homelessness, housing, and family violence. Her interest in family violence is primarily focused on its effects on the family as a unit, and the subsequent challenge for the wider community. She has held office on several state peak bodies, been appointed to a number of state committees and boards, and is active in the community in her personal life. Her interests are in social policy, and ensuring that policy reflects the changes required by those experiencing poverty and harm. She currently provides oversight to Community & Social Services within the greater Melbourne area. 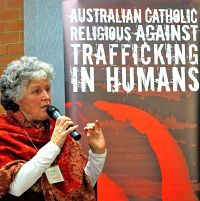 A major campaign is being run through ethnic media to reach people forced to work in Australia for little or no wages. The Radio Awareness Project campaign is funded by ACRATH (Australian Catholic Religious against Trafficking in Humans), and issues announcements in Vietnamese, Mandarin, Thai, Arabic, Filipino, and Spanish. The campaign is supported by the Australian Federal Police, with texts by Anti-Slavery Australia (part-funded by the Australian Government). Read this article in full.
Photo Christine Carolyn