The 2013 federal election has been like no other. Never before have I heard so many people saying they are so distressed about the policies of the major political parties that they do not know which to vote for this time, or they intend to make a protest vote with the Greens, or to vote informal. As the large crowd at our SPC forum recently showed, many are deeply troubled by the treatment of asylum seekers by both major parties. Others are concerned about the sudden switches on major policies by both parties in the last-minute hunt for votes.
To read this article in full, click HERE.

Reflections on the election policies and campaign, and how to communicate with young people on these issues, including those who are not tuned in to the mainstream media.
Knox Centre Cathedral Room, 383 Albert Street East Melbourne
(Access the Cathedral car park via Lansdowne Street)
Light refreshments available afterwards
For the flyer for this event, click HERE.
RSVP Sonia Starc by Monday 23 September sonia.starc@css.org.au, 03 9287 5566

The important difference between the churches and the main political parties is often one of degree. The churches will set out the goal in a reasonably ideal situation. The political parties generally align in this direction, but are limited by two constraints. Firstly there is the financial constraint which can often limit actions. Secondly, they need to have one eye on the electorate.
To read this article in full, click HERE.

A lesson in hope: the SPC forum on asylum seekers

A capacity crowd of 130 crammed the YTU Study Centre to hear Caz Coleman and Misha Coleman (no relation) talk candidly about Australia and asylum seekers. Caz has many years experience and hands-on expertise in migration law and international conventions. She warned that what she had to say could be controversial and possibly unpopular.
To read this article in full, click HERE.

How to make your voice heard

Also speaking at the SPC Forum, Misha Coleman, Executive Officer with the Australian Churches Refugee Taskforce, energised the audience to think of practical ways to participate in campaigning and action. There is no better time to speak out than in the lead-up to an election. People were encouraged to write that letter or make that phone call to their local member. Positive action is important, particularly as a salve to the despair many people feel about Australia’s treatment of asylum seekers.
Further resources can be found in these church links:
–  Australian Catholic Social Justice Council August Briefing: read the stories, plus The Church’s responses to PNG boat arrival ‘solution’.
–  Refugee Taskforce: why Churches care about asylum seekers (and what the Taskforce positions are).
–  A short document, produced by Uniting Justice explaining the PNG arrangements.
–  A resource designed for synod/bible study groups by the Anglican Diocese in Brisbane.Two short pamphlets help groups to work through the larger document.
–  Frequently asked questions, produced by Baptcare.
–  A fact book about asylum seekers and refugees produced by the Australian Federal Parliamentary Library, updated February 2013.
–  Election issues fact sheets, produced by the Uniting Church in Australia HERE and HERE.These resources have suggested questions to ask your candidates, such as:
.  Will you work within your party for more just and humane policies, including an end to the detention of children in immigration detention facilities?
.  In government, how long will your party leave children on Manus Island?
.  Now that the Minister for Immigration is no longer the legal guardian for children sent to offshore detention sites, who will your party assign to protect the rights of these children?
.  Will you work within your party for just and humane policies, including an end to the ‘no advantage’ principle?
.  In government, how long will your party leave children on Manus Island?
.  What policies will your party put in place to work collaboratively in the region to improve the conditions for asylum seekers in Indonesia and Malaysia and other places, so that they do not have to seek refuge by engaging people smugglers?
To read this article in full, click HERE.

The SPC Board is delighted to welcome Revd Brendan Byrne as our latest member.
Brendan worked in the finance industry, but grew concerned about ethical issues in business and industrial relations, and became a trade union official in the furnishing trades industry, and later in the financial (insurance and non-banking) industry. In his late thirties, Brendan became a member of the Uniting Church in Australia. After study at the United Faculty of Theology and the Uniting Church Theological College, both Brendan and his (now) wife Sandy were later ordained into the ministry. Brendan is currently ministering at Mountview Uniting Church in Mitcham, and Sandy in the Uniting Church Banyule Network. Brendan and Sandy have a two-year-old daughter, Sophia.

Caz Coleman speaking on The crisis with asylum seekers: realism versus humane concern, and
Misha Coleman on Making a difference: what YOU can do 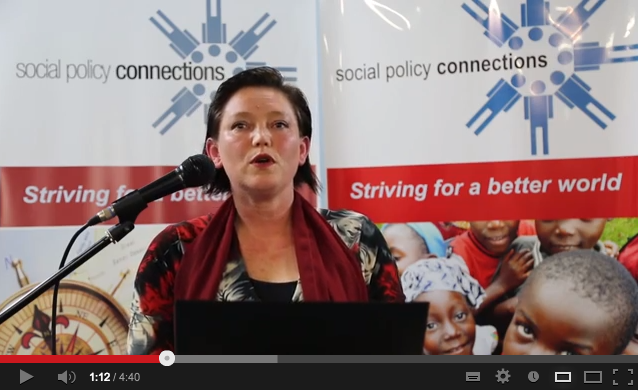 In the post-APEC scramble to lavish funds on PNG, here’s what the country really needs …